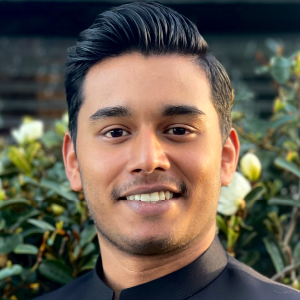 Sid Chand is a New Zealand born, Fijian-Indian tenor from Auckland. Having completed his BMus (Classical Performance) in 2020, he is now in the process of completing his MMus under Dr. Te Oti Rakena.

Sid is an avid performer in both choral and opera circles. He is a former member of the New Zealand Youth Choir and current member of Voices New Zealand and New Zealand Opera Chorus. Besides ensemble singing, Sid has also found growing success as a soloist. He was the titular character in University of Auckland’s production of Offenbach’s Orphee aux enfers in 2020. He was also going to play the Earl of Essex in the University’s opera scenes, however this was disbanded due to Covid-19.

Sid is also in demand as an Oratorio soloist; his performed repertoire includes Bach’s Magnificat with Auckland Chamber Choir, and Handel’s Messiah with Harbour Voices. In early 2021, Sid was a student at the New Zealand Opera School in Whanganui – giving him the chance to work with some of New Zealand’s greatest musicians and vocal consultants.

Sid has been recently been accepted to take part in the programme again in early 2022. Sid has been the recipient of various scholarships including the Evelyn M Harrison and Anne Bellam performance scholarships at the University of Auckland. In addition, Sid received a generous financial grant from the Freemason’s Lodge of the Liberal arts and a performance opportunity to sing with the Auckland Youth Orchestra.

Sid’s future performance engagements include being an ensemble member in Luke Di Somma’s new work Unruly Tourists, and being a chorus member in New Zealand Opera’s productions of Il Trovatore, Macbeth, and Verdi’s Requiem. Sid will also be a soloist in the New Zealand Opera’s 2022 Opera in the Park. When he is not performing, Sid is an avid practitioner of Brazilian jiu-jitsu.