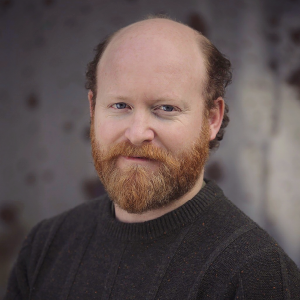 Byron’s previous work with New Zealand Opera was in 2017 when he played Ko-Ko in The Mikado and then again with the State Opera South Australia in 2019. In 2018 he performed various roles in NZO’s Candide as part of the New Zealand Arts Festival.

As a comedy and dramatic actor, Byron is consistently sought after by New Zealand and international filmmakers. His recent and soon-to-be-released film and

television credits are a long list of projects such as The Luminaries, Shadow In The Cloud, Nude Tuesday, Muru, Juniper, The Mountain, Top Of The Lake, Shopping, and Brokenwood Mysteries.

For most New Zealanders, some of Byron’s most well-known roles have been in the commercial space where he never misses an opportunity to flex his comedy muscles. Byron may be most recognizable as the Sky Broadband Lycra Guy, or as Tim, the over-enthusiastic All Blacks supporter in the award-winning Mastercard commercials featuring Richie McCaw, Ma’a Nonu, Dan Carter, and Ali Williams.