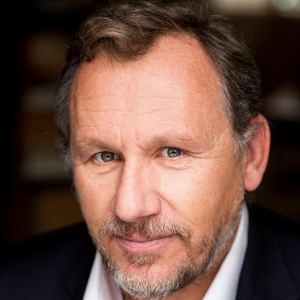 Andrew was born in Birmingham, in the United Kingdom and has been working as a professional actor since the 1980’s.

He honed his talents at the Arts Educations School in London, being equally gifted as a singer, dancer and actor; the coveted triple threat.

Showing how diverse his career would be, when first out of college Andrew (soon known by Andy) supported American soprano legend Arleen Auger in Handel’s Alcina, and an unforgettable early career highlight was performing in 1985 for Her Majesty the Queen in the Royal Variety Show, at the Theatre Royal in Drury Lane. Andy then debuted on the West End in Seven Brides for Seven Brothers in the early 90’s, and was a mainstay there for the next five years, highlights including Little Shop of Horrors and South Pacific.

He soon proved to have as much appeal on the screen as the stage, working consistently in TV and Film in the UK through the 90’s and early 00’s. Roles in Pride and Prejudice, Heartbeat, Eastenders, The Bill, and The Governor are favourites from the small screen, and his key roles in feature films Mean Machine, & In the Beginning will always be UK highlights, topped off by working alongside Robert Redford in Spy Game.

Andy emigrated to New Zealand in 2006, and rapidly became one of our most in-demand actors, quickly building up an impressive collection of stage and screen credits.

He continues to be sought after screen actor in New Zealand having appeared in numerous local and international series and films; including The Brokenwood Mysteries, Westside, Shortland Street, Outrageous Fortune, Spartacus, Letter for the King, The Shannara Chronicles, Ash Versus Evil Dead, The Meg, and Top of the Lake, to name but a few.

The Unruly Tourists is Andy’s first show with NZ Opera.